A brief overview of the actual data collection hardware.

This is post number III in a series describing my DIY temperature and humidity sensors. 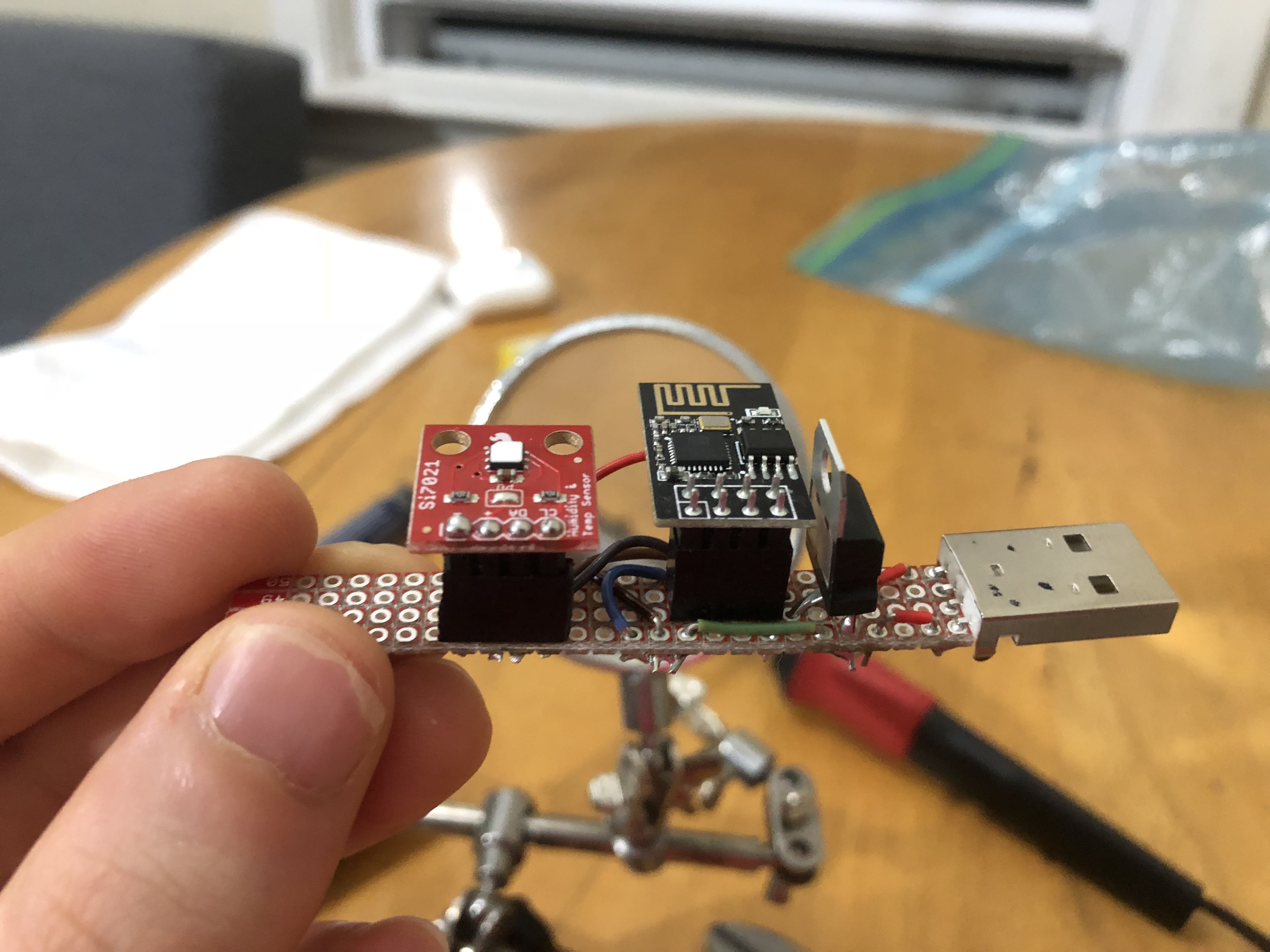 The sensors themselves are pretty simple, consisting of only five components.

Not including solder, various lengths of wire, and the perf board that the components are mounted on. I used a Sparkfun Snappable Protoboard ($7.95) as the base for each of my sensors.

Prices given are from Sparkfun as of September, 2018

The goal was a sub-twenty dollar, reasonably accurate temperature sensor that I could place anywhere in my house and forget about.

My house isn’t wired for Ethernet– if it was I could solve both the transmission and power problems with Power over Ethernet.

In the past I’ve worked with the Nordic NRF24L01+ radios which are reasonabley priced and have decent range, but I would need some sort of relay that could receive the wireless transmission and send it over TCP/IP to the InfluxDB. Someone has done this, but it seems like extra work when I already have a Wi-Fi network in my house.

So I went with the ESP-8266 Wi-Fi module because I had two laying around. Future iterations may use a different version of the chip.

Some impressive work has been done making the ESP8266 run on batteries for a very long time, but batteries eveuntally need charging or changing.

In summary 120V AC power comes out of the wall, gets converted to 5V DC by the USB wall charger, which the sensor is plugged in to. Onboard the circuit board the voltage is dropped again to 3.3V which the radio and the sensor can use.

Right now I’m only using the USB power and ground lines, but I dream of being able to fit some sort of USB Serial Adapter and a logic level converter so that the ESP-8266 can be programmed directly from the USB port. At the moment it’s a bit of a pain to change Wi-Fi networks, I have to remove the ESP8266, and plug it into a jig to reprogram it. 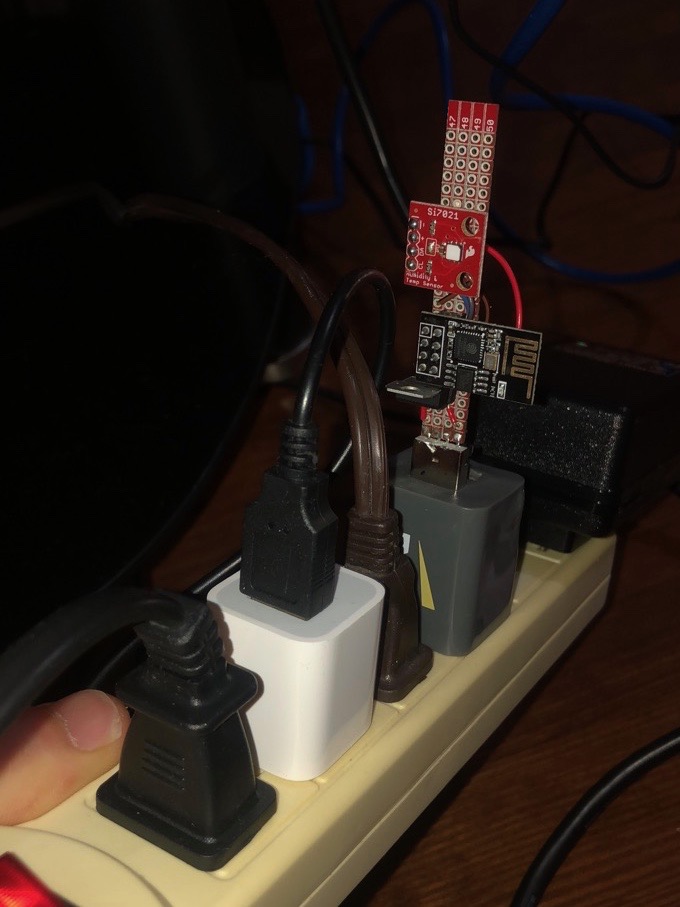 One issue is that a lot of stress can be put on the pins connecting the USB port to the sensor board. 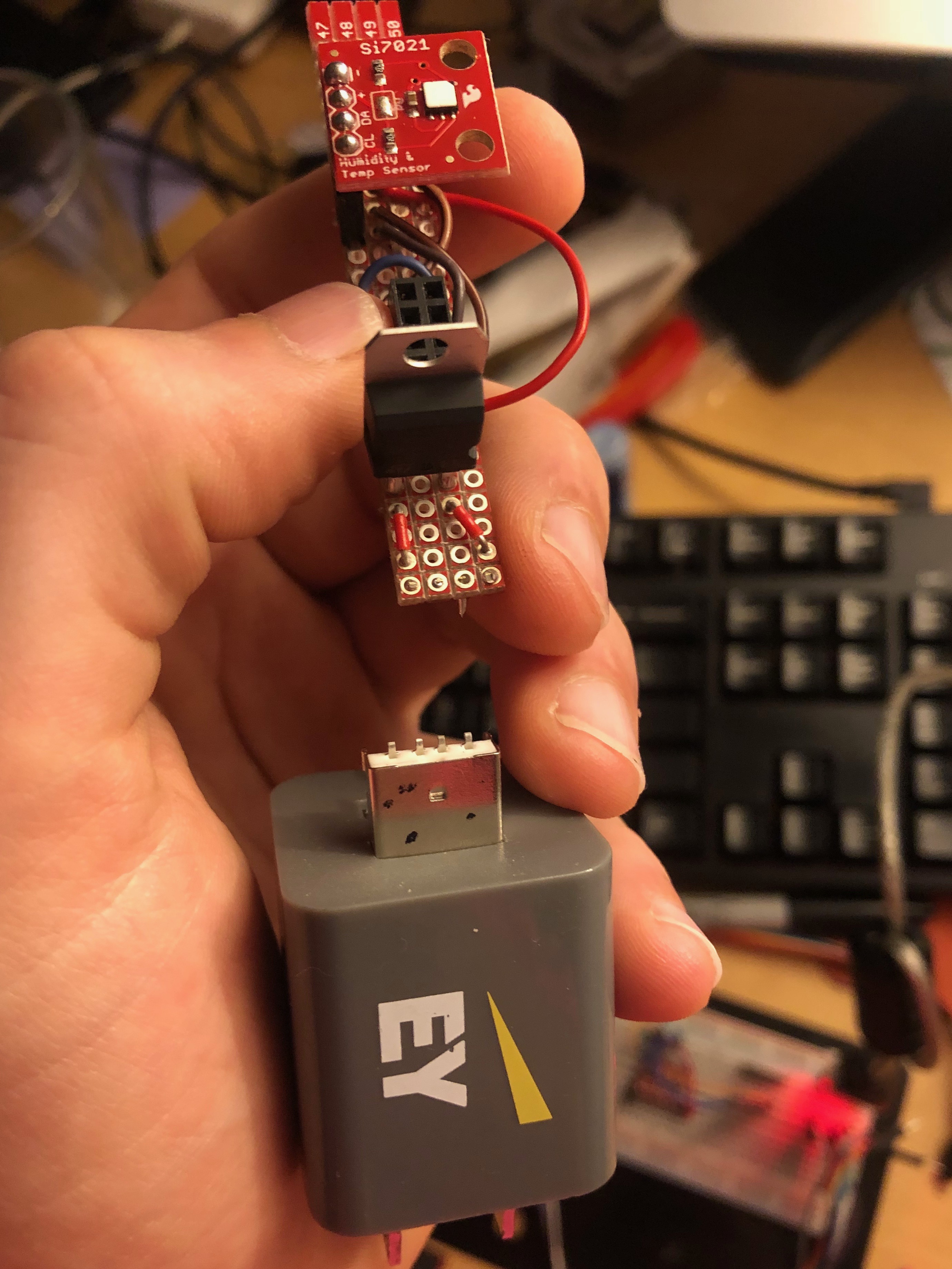